October 29, 2009
This recipe is so good and easy to make.  Every time I make it I am reminded of my Grandma.  Probably because it is delicious and a comfort food.  I have to admit I did not make my own pie crusts.  My excuse is I found one in the freezer that needed to be used.  While I was rolling it out I wondered what it would taste like with a real home made crust.  So next time I make this it will be with a home made crust.  I think I can, I think I can...and I need to remember to pick up some shortening while at the grocery store. 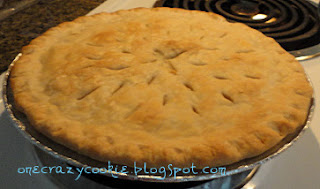 Cook vegetables until tender.  Set aside.  In a saucepan, melt butter. Stir in flour, salt and pepper until well blended.  Gradually stir in water, milk and bouillon.  Bring to a boil stirring constantly and boil for 2 minutes.  (It should be like gravy). Remove from heat. Stir in chicken and vegetables. Put bottom crust into pie pan.  Pour filling into crust. Place 2nd crust over filling.  Trim, seal and flute edges. Cut slits in the top of the crust. 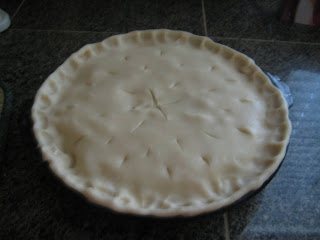 Bake at 425 degrees for 30-35 minutes or until the crust is golden brown and filling is bubbly.  You may want to shield the edges after the first 15 minutes to avoid over browning. 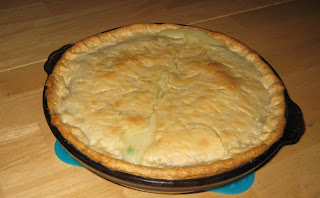 As you can see I either did not vent my crust enough the filling bubbled out a bit.  Or it could have been the crust had been in the freezer way too long.  Another evidence that I should of made my own crust.  Oh well.  It is totally gone.  I need to figure out a way to make it so that I have leftovers. 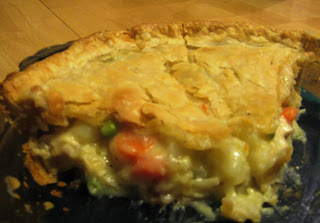