November 10, 2009
I have no idea where the name of this recipe came from but it works and I like it.  The first time I ate this pizza I must admit I did not realize the crust was spaghetti.  It tasted so good.  I had not made it in a long time.  The girls turned up their noses when I told them what I was making for dinner.  Once they tried it all opinions changed.  My picky eater had 3 slices and then ate it for breakfast the next morning.  It is a fun change. 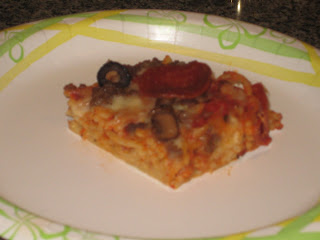 Break spaghetti into thirds.  Cook in a large pan, drain and cool.  In a large bowl beat eggs slightly. Stir in milk, cheese, garlic salt and salt.  Add cooked spaghetti and stir until well combined.  Grease a cookie sheet and spread mixture in it.  Bake at 400 degrees for 15 minutes.  Remove from oven. 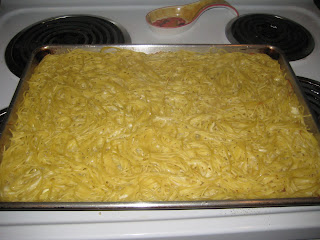 Use whatever toppings you like on pizza.  Just a hint though: when thinking of toppings use what goes well with spaghetti. From experience ham and pineapple do not fit in this category!! 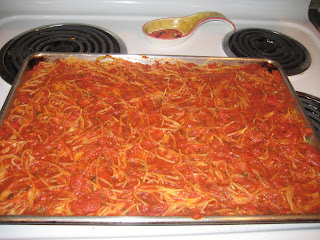 Spread sauce evenly over the crust. 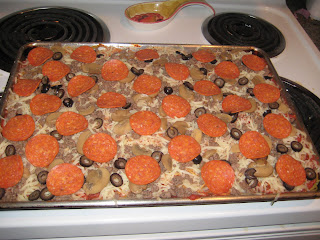 Sprinkle cheese, meat and toppings on the top. Return to oven and bake 15-20 minutes until heated through. Let stand 5 minutes. Cut and serve. 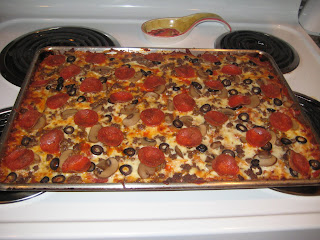 As I was making this I thought it would be great made with veggie toppings.  I might also try an alfredo suace next time.

This recipe is linked with Tempt My Tummy Tuesday.