April 06, 2010
Every since a friend of mine announced that her family has a tradition of home made cinnamon rolls for General Conference my children have been bugging me to also make it a tradition of ours.  This time I decided I would oblige.  I used to make cinnamon rolls a few times a year and then I had an event in my life that in my mind I somehow connected to the making of cinnamon rolls, so I did not make them again for many, many years (like 10).  Pathetic and crazy.  Remind me to share the story some time.......It does end up with a happy ending.  Back to the main idea.  I wanted cinnamon rolls that I could make the night before and then cook in the morning.  In my search I came upon a recipe that had you leave them to raise on the counter overnight.  I must admit I was a little skeptical, but then I read who's recipe it was...MY GRANDMA'S! No longer skeptical I went to work and they turned out delicious. 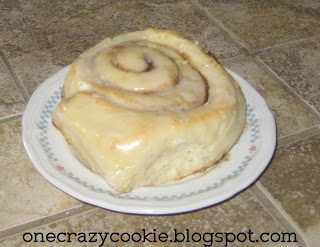 Grandma's Overnight Cinnamon Rolls
1 cup milk
1 cup butter
1/2 cup sugar
Place in a saucepan.  On medium heat melt butter and bring to a slight boil. Stir constantly.  Remove from heat and allow to cool completely.
1 Tablespoon yeast
2 cups warm water
Dissolve the yeast in the water.  Sprinkle about 1 teaspoon of sugar in the mixture.  Allow it to proof (bubble a bit)
Add to the yeast mixture:
2 beaten eggs
1 teaspoon salt
the milk mixture
5 cups flour
Mix for 5 minutes.
Then add 4-5 cups more flour (just enough to make the dough come clean off the sides of the bowl.)
Then mix for 10 minutes on high.  *Make sure your mixer does not walk off the counter.  I did not understand this until actually doing it.  Plan on staying right next to your mixer for the 10 minutes.  It does tend to move around.  I actually mixed mine on a 5 or half the speed.  I was a little nervous to turn it all the way up for that long of time.
NOTE: The following are the original  instructions.
Start rolls around 4 PM (I started around 7 PM) and then every hour let the mixer mix for about 2-3 minutes.  When ready for bed split the dough in half and roll out about 1/2 inch thick into two large rectangles.
FILLING: melted butter, cinnamon (lots), white and brown sugar.  (the amount depends on how gooey and rich you want them )  I used 1/4 cup butter, 1/2 cup white sugar, 3/4 cup brown sugar and about 2 teaspoons cinnamon.
Rolll up.  Now this is the really cool trick that my Grandma taught me.  Get out some waxed dental floss.  Cut off a long piece. Wrap it around your roll: 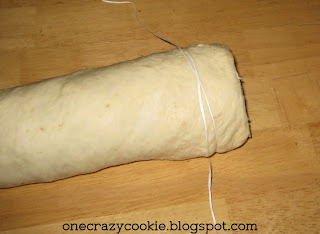 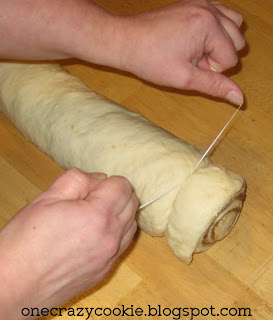 and pull it through the dough. 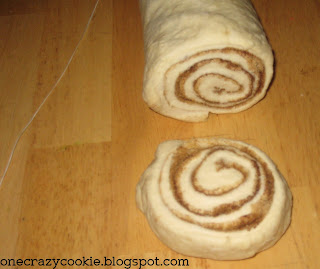 You want your rolls about 1 inch thick.
Place on cookie sheet 3 across and 4 down, with room to spare between them.

Cover them lightly with sprayed (greased) plastic wrap.
Let rise all night on the counter.
(I had trouble with getting the measurement right at first so I did not end up with 24 rolls)

Bake in the AM at 375 degrees for 12-15 minutes.
Frost while they are warm with a mixture of:
melted butter, powdered sugar, a bit of milk and vanilla.

This pan looked good.  They other one did not, but still tasted great!
I wish I would of used more filling mixture.  I felt these were lacking a little bit.
My husband said they were PERFECT! (How sweet was that!!) He is hoping I will make them more often than once ever 10 years! HA HA!!

Check out Tuesday at the Table and Tempt My Tummy Tuesday!