It is hard to believe in a great country like ours, 1 in 6 people struggles with not having enough food.
Tim McGraw

According to Feeding America, approximately 5.7 million different people receive emergency food assistance from the organization in any given week.
When I saw this fact it totally broke my heart.  I am astounded and saddened by this statistic.  What can we do about it?  Luckily, Hamburger Helper has made it easy to create a quick delicious meal but alao an easy way to help out with the hunger issue.
To raise awareness about the national issue of hunger, Hamburger Helper® is partnering with GRAMMY® Award-winning singer, songwriter and actor Tim McGraw to help Feeding America deliver millions of meals to local food banks through the Show Your Helping Hand™ campaign. McGraw will lend his voice to the campaign through a Public Service Announcement which will be distributed nationwide.
Support the campaign by submitting codes from specially marked boxes of Hamburger Helper at http://www.showyourhelpinghand.com/ or by logging on to make a donation. Hamburger Helper has already donated more than half a million dollars and will contribute up to an additional $100,000 to Feeding America through this program. Don’t think one code will make a difference? The 17 cents Hamburger Helper donates per code is enough for Feeding America to deliver one meal to a local food bank.
You also can an autographed copy of Tim McGraw’s “Southern Voice” CD by visiting. http://www.showyourhelpinghand.com//
Now to make helping out even more fun Hamburger Helper through MyBlogSpark has graciously given me a prize pack to be given to one of my readers!! 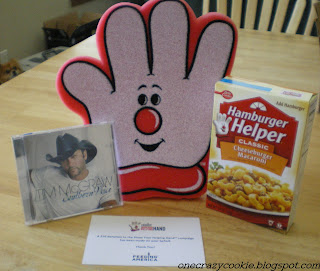 This prize pack  includes a box of Hamburger Helper skillet meals, a Hamburger Helper foam “Helping Hand” and a copy of Tim McGraw’s “Southern Voice” CD. In addition, Hamburger Helper will make a $10 donation to the Show Your Helping Hand™ campaign on the winner's behalf.
To win this AWESOME prize pack be a follower of One Crazy Cookie and leave me a comment telling me how you will encourage others to submit codes and join the Hamburger Helper/Feeding America fight against hunger.
For extra entries:
2. Visit showyourhelping hand.com and tell me something you learned.
3. Display my button
4. Blog about the giveaway. Be sure to leave me the address.
One winner will be chosen by random generator on December 10, 2010

*The prize packs and information were all given to me from Hamburger Helper through MyBlogSpark.

July 13, 2012
Do you ever picture yourself eating a slice of Italian bread you know the type with the crunchy outside and soft and delicate inside. Well this is the recipe for you and I have found the secret to getting the perfect crust!! Crusty Italian Bread makes 2 loaves 1 1/3 cups warm water 2 1/4 teaspoons yeast 1 Tablespoon brown sugar 1 1/2 teaspoons salt 1 1/2 teaspoons olive oil 4 cups flour Place warm water, yeast and brown sugar in mixing bowl. Stir and let stand for a few minutes until it start to bubble and foam a bit.  Add olive oil and salt.  Mix and add the flour gradually.  You want to add enough that the dough comes away from the sides of the bowl.  You want to mix it with the dough hook for a few minutes. ﻿ Cover and let the dough rise until doubled about 30 minutes. Punch down dough and divide in two and form into two loaves (I doubled the recipe this time.) Cover with a damp cloth and let rise until doubled. Preheat oven to 375 degrees. Beat
19 comments
Read more