Help Cheerios Cheer for Military Families and a GIveaway

Everyone can use a little pick me up now and then. But for the millions of military families manning the fort at home while their loved ones are away serving, a gesture of Cheer is especially welcome.

When our troops are called to serve, their families must rise to meet the challenges of service as well. To thank them, Cheerios and the USO have partnered in a postcard campaign that spreads Cheer directly to these honorable military families and supports USO programs. Here’s how it works:

During the months of October and November, 2011, specially-marked boxes of Cheerios cereal will feature Cheer postcards on the front of the box. Consumers can simply cut out the postcard from the Cheerios logo, write a message of thanks on the back, add a stamp and mail the pre-addressed card to the USO. The USO will deliver the Cheer card to military families across the country.
For each postcard received through November 2012, Cheerios will make a $1 donation to the USO to help fund programs that support military families.

To kick off the campaign, Cheerios has already donated $150,000 to the USO and will donate up to an additional $100,000 based upon the number of postcards received from specially marked boxes now through November 30th, 2012.


Now good news for you Cheerios would like to send some cheer to one lucky reader, a great prize pack containing: 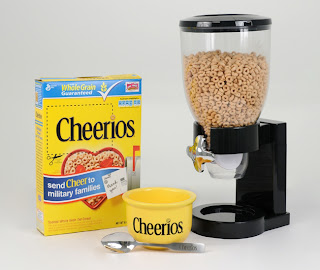 To enter be a follower of One Crazy Cookie and leave me a comment on how military families inspire you!
For additional entries like One Crazy Cookie on Facebook.
Make sure I have an email address so I can contact you.
Winner will be drawn  by random number generator on December 3, 2011

Sending a “Cheer” postcard is a simple way to say thanks and lift the spirits of our country’s military families. So, take a moment out of your day to spread some Cheer
and send a message of thanks! ﻿

Cheerios cereal, information, and giveaway have been provided by General Mills through MyBlogSpark.