March 26, 2010
Chicken noodle soup is usually a meal that I just throw together, no measuring of ingredients. Which calls for alot of taste testing. I decided that it was time for me to put together a basic recipe to make it easier the next time I make it. It turned out really good. The only bad thing or good thing depending on the way you look at it, is that it always tastes better the next day. Now why can't I remember that and make it a day in advance?? 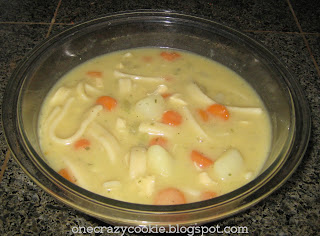 Chicken Noodle Soup
6 cups water
1-2 chicken breasts, *cooked and cut up*
1 small onion (1/4 cup), diced
5 teaspoons chicken bouillon
1 can cream of chicken soup
1 teaspoon dried parsley
1/4 teaspoon pepper
1 cup celery, chopped
3/4 cup carrots, sliced
1 medium potato, diced (optional)
noodles
*Quick Version:
Combine all ingredients except for the noodles. Bring to a boil. Reduce heat. Cover and simmer for 10 minutes or until the vegetables are crisp-tender. Stir in the noodles; cook until the noodles and vegetables are tender.
*Homestyle Version
Place water, boullion, onion, parsley and chicken in a pot. Bring to a boil and then reduce heat. Simmer for 20 to 30 minutes. Remove chicken, dice and place back into pot. Add carrots, celery, parsley. Simmer together for a while(sometimes I leave it on low for several hours, could be done in the crock pot). Stir in cream of chicken soup and bring to a boil: add diced potatoes. Cook for a few minutes and then add the noodles. Cooking until the noodles are done and vegetables are tender.
Usually I like to make my own noodles. This time I was in a time crunch and discovered these in the freezer section at Walmart. 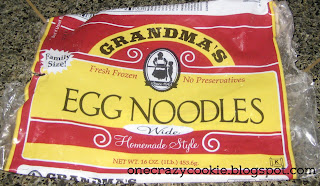 They were really pretty good! Almost as good as my own Grandma's, who always said, "A good broth makes for good noodles!"