Tried It Out Thursday: Simple Couscous

May 20, 2010
I must admit I had never tried Couscous until about a month ago.  It was a little sample and I liked it.  I was a little afraid to add it to the family meals, but finally bought some the other day.  Since we have been trying to eat healthier I figured now was a good time to try this out.  The kids were leary, all but one ate it all.  My oldest thought it was oatmeal (what???). After looking at it Hubby called it by a not so nice name.  Then ate one large helping and later added another to his plate.  He later admitted it was pretty good.  I really liked it and will make it again perhaps adding a few more veggies to the mix. 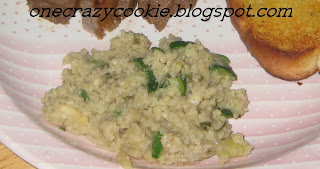 Simple Couscous
adapted from Rachel Ray
2 cup chicken broth
1 1/2 cup couscous
1 small zucchini, diced
1/4 cup onions, diced
1 Tablespoon butter
1 teaspoon dried parsley
salt
pepper
Place the chicken broth and butter in a medium  sized pot.  Cook on medium heat.  Once butter is melted add onion and zucchini, cook until veggies are tender.  Bring to a boil, add coucous, salt and pepper to taste.  Stir quickly to mix and take pan off heat. Place a tight fitting lid on pan and leave it covered for about 5 minutes.  Fluff with a fork and stir in almonds and parsley. 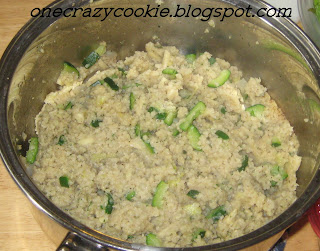 Note: As I was typing this recipe I realized I only added 3/4 cup of couscous.  Half the amount it called for and I liked it.  Now I am left wondering if it will be the same with the right amount.  Guess I will just have to try it out and see!!
~Tiffanee

side dish
Labels: side dish