March 03, 2013
A friend of mine introduced me to red velvet a few months ago and ever since I have been hooked!!  These brownies were delicious!! I however did not have the amount of red food coloring it called for, but they still turned out red.  I will be making them again!! The frosting was the perfect addition. I guess it is not just for sugar cookies after all!! 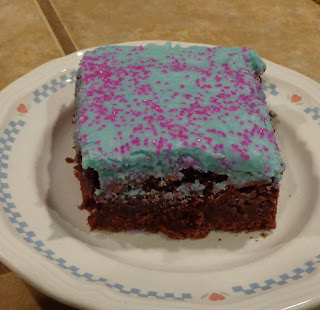 In the bowl of a stand mixer fitted with the paddle attachment, beat together the butter and sugar on medium speed until light and fluffy; about 2 minutes.  Add eggs one at a time, mixing well after each addition, then stir in the remaining 1 teaspoon of vanilla.

With the mixer off, add in the cocoa mixture, then turn the mixer to medium and beat the two mixtures together until they are one uniform color.  Slowly add in the flour and salt and mix on medium-low speed, just until combined.  Do not over mix.

Remove the bowl from the mixer & stir up the batter with a rubber spatula once or twice, just to ensure all of the flour has incorporated from the sided of the bowl and there isn't anything stuck on the bottom of the bowl.  You'll want on uniformly colored (red) batter.
Spread into the prepared pan 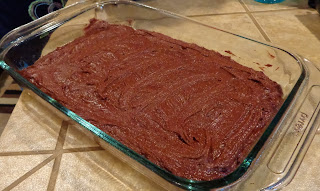 Bake for 30-40 minutes or until a toothpick comes out clean when inserted into the center of the brownies.  Let cool and frost with Creamy Buttery Frosting! 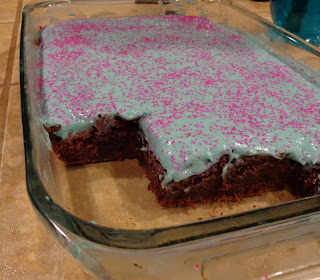 Delicious!! As you can see my family could not wait for me to take a picture before digging in!!

July 13, 2012
Do you ever picture yourself eating a slice of Italian bread you know the type with the crunchy outside and soft and delicate inside. Well this is the recipe for you and I have found the secret to getting the perfect crust!! Crusty Italian Bread makes 2 loaves 1 1/3 cups warm water 2 1/4 teaspoons yeast 1 Tablespoon brown sugar 1 1/2 teaspoons salt 1 1/2 teaspoons olive oil 4 cups flour Place warm water, yeast and brown sugar in mixing bowl. Stir and let stand for a few minutes until it start to bubble and foam a bit.  Add olive oil and salt.  Mix and add the flour gradually.  You want to add enough that the dough comes away from the sides of the bowl.  You want to mix it with the dough hook for a few minutes. ﻿ Cover and let the dough rise until doubled about 30 minutes. Punch down dough and divide in two and form into two loaves (I doubled the recipe this time.) Cover with a damp cloth and let rise until doubled. Preheat oven to 375 degrees. Beat
19 comments
Read more