January 27, 2010
I am proud to say I took full advantage of the ham I cooked last week and used every bit of it; including the ham bone.  I got this recipe from my good friend Katie.  She made it for a contest at her husband's work one year.  She had me come and taste it before she took it. I was instantly hooked and of course her soup won!! I believe she has won the last several years in a row with different recipes.  Perhaps, I should get her to share all her prize winners with us!!
I did find a great kitchen tip.  My ham bone was pretty fatty, so there was quite a bit of fat on top of my soup.  I found that if you add a few lettuce leaves to the top it will soak up the fat.  Then you just remove them and the fat will go with them.  It worked pretty well. 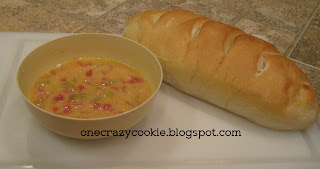 Place ham bone in crock pot.  Add all ingredients except the milk and cheese.  Stir. Cook on high for 2-3 hours. Turn to low and cook about 2 more hours. (Or cook on low for 6-8 hours). Remove ham bone, cloves and bay leaves.  Take meat from the bone,shred into small pieces and return to the soup.  Stir in milk and cheese.  Cook on low until it is heated through.  Add cheese and stir until it is melted.  I served it with Crusty French Bread.

*Stove Top Directions: Saute onions, celery, and garlic in butter until tender. Add other ingredients except milk and cheese. Bring to a boil. Reduce heat, cover and simmer for two hours.  Then follow above directions.
*The original recipe calls for 1 lb dried great nothern bean, cooked. (I was not thinking enough ahead of time, so used the canned instead.)

Here's what I did with my ham:

Chicken Cordon Bleu Casserole (In the freezer) It was cooked on Sunday!

and I froze two small bags of cut up ham for future use.

Check out some great Crock Pot recipes over at Dining With Debbie.